Radio Is My Life!

I was more than a little nervous when I got the call to come to WROV/Roanoke. You have to remember, this was the radio station my family listened to when we traveled from Martinsville to Roanoke for a big day out. One of my fondest memories is all of us piling into my dad's 1955 Ford, driving to Roanoke for lunch at Lendy's and then on to Woodrum Field to watch the planes take off and land, and maybe up to Mill Mountain for the zoo and to look out over the Roanoke Valley with the Mill Mountain Star

to our backs. Plus, the personalities at WROV were top notch! They could have gone anywhere, but chose to stay in the Roanoke Valley. Why don't you take a look? Click it-The WROV History Site. Go ahead, I'll wait. Pat Garrett, former WROV personality, put it together. Bravo, Pat! A true band of 'Radio Brothers'! It was my first Arbitron rated market, ok, only once per year, but this was the big time! Burt Levine, owner, posessed one of the most brilliant 'radio minds' I've ever come across. EVERYONE there had one goal in mind-to make that little one thousand watt station sound as if it were blasting out of New York. And for those of us who sat behind the mike, and for those of you who heard it, you know it sounded every bit as good as radio in the big cities. I salute them all. True gunslingers! Oh yeah! For those of you with your mind in the gutter, 'BIG LICK' is a nickname for Roanoke! Geez Louise!

Trying to get through an interview with Nancy Wilson of Heart and drummer Michael Derosier. 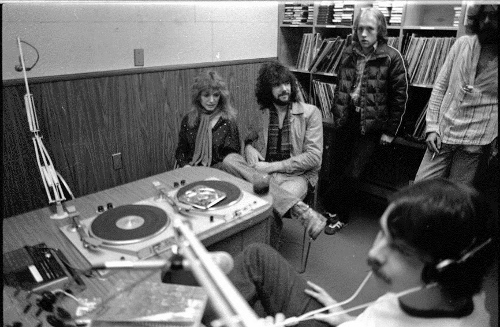 A much heavier and longer haired 'Bear' A cookie eating contest during a station promotion. (At the conclusion, I was feeling much the same as this text color!) THE photo that convinced me it was time to drop a couple of pounds...

What The Hell Happened? Skinny 'Bear' 'And you'll stay here until you can say the word-linoleum' I believe that this type of giveaway will save radio in the future. More chainsaws! "I've just won a stereo! Wait! Isn't your station AM?"

Palm Trees, And Sleeping In My 'Bug'..

While at WROV, I quickly figured out what my goal was. You gotta focus on one thing, do it the best you can, and pray you can be a umm.. McDonalds! Really, c'mon, who pops to mind first when you think of burgers? Be honest. You got it! I wanted to become a morning man! Hell, Dad had always gotten me up early anyway. He was a milk man (among other jobs), and I'm one of those idiots that enjoys getting up at three a.m. It was a natural. One problem though. WROV had a much loved morning man, Rob O'Brady, and I knew I couldn't move to that time slot in Roanoke. So, resumes are out again, along with my usual one to WLS (they are getting ready to call me, I just know it!) and I get this call from a Program Director in Charleston,S.C.

It was for a helluva lot more money. I had three boys by that time so I bade WROV farewell!. During my first week at the station, WBJW-FM Orlando, Fl. calls because I had sent them a tape too. It was for even more money and a bigger city, so I go into the Program Director's office, say that I'm sorry, but I want to go to Orlando. I told him I'd even give back the moving money! He gets upset, locks me out of my hotel room (some stations will pay for that until you find a place of your own), and I spend the remaining week in the back of my 1973 Volkswagen! Boy am I glad for everyone around me that the station had a shower! (Are you still mad at me, 'Scooter'?) Next up, my first radio trip to Florida and how a listener's husband wants to gun me down!

Go Ahead. Pull The Trigger! My life is already like the Willie Nelson song 'On the Road Again'. Twelve hours straight from Roanoke,Va.(We still owned a home there and I never moved my family to Charleston. Hell, there was no time!) The only thing that kept me going was hearing promotional announcements between songs for 'THE MOUTH OF THE SOUTH--COMING MONDAY MORNING!!', when I got close enough to hear the station. My first thought was that they had hired someone else! Who is this 'MOUTH OF THE SOUTH'? I later found out, it was me! Whew! I finally arrive in Orlando, collapse onto the bed face first, trying to grab some shut-eye, when the phone rings. It's my new General Manager-M.F. Kershner. Nice name, huh? Wants me to drop by the station, sign some papers and go on the air the next morning! What? I'm bone tired, I smell like my old high school gym clothes, and I gotta go on the air the next day, plus I miss my family! CRAP ON A CRACKER! I'm glad I went though. Professional all the way, and I knew I had met a kindred spirit in M.F. All he wanted to do was win! WBJW was fifth in the ratings when I went there. Number one in less than a year! Was it all due to me? Nope and nope again. As it was with

, it was the TEAM that got it done! We all wanted to win so badly, we hung around the station just in case one of the other jocks needed us for something, and even attended remotes for support! Oh God! I can hear my high school coach now. 'THERE IS NO I IN TEAM, BOY!'  And the guy was right. It was at WBJW too that I met the most elusive Program Director I've ever known, Tom West. In the four years I was there, I think I saw him three times! He'd call me on the phone in the studio and yell at me for something he thought I'd done, and that was it! Think about this for a moment. A boss you never saw! And when he finally did drop by the station, it was a quick pat on the back and then he was in the wind again! Tom was a legend in Orlando radio and he's gone now. Rest easy, Tom, your management style is certainly missed. You want the gun story don't you? This guy keeps calling me on the request line accusing me of banging his wife. Was the word banging too strong? How about having a 'spirited physical relationship' with? What a nut job! He won't stop calling. Shows up at the radio station one day, packing a piece, promising to blow a hole in me that he can walk through. M.F. attracts his attention long enough so that I can hit 911, the cops come, take him away, and I am excused long enough to clean out my pants! I met my future wife at WBJW. (I just didn't know it yet, but that's for later). Next up, everyone says I'm so lucky to be sitting in the Don Imus chair! Whoop-de-freakin'doo!! And, the priest who played rock and roll!

Stunt for a local client. "Come Meet Barry Michaels From BJ 105 And Let Your Kids Play In The Snow!"

(You radio people know the drill.)

They are a real 'crack' outfit! Click the logo..